Each year, the Virginia Chapter of the AAP recognizes an individual(s) in our Commonwealth who stand up for the rights, values, and recognition of Virginia’s children.

Dr. Sandy Chung, President of the Virginia Chapter, AAP presented Secretary Daniel Carey with the 2019 Virginia Chapter, American Academy of Pediatrics Child Advocate Award in recognition for all her support of many of our proactive initiatives as well as your tireless advocacy work throughout the years. 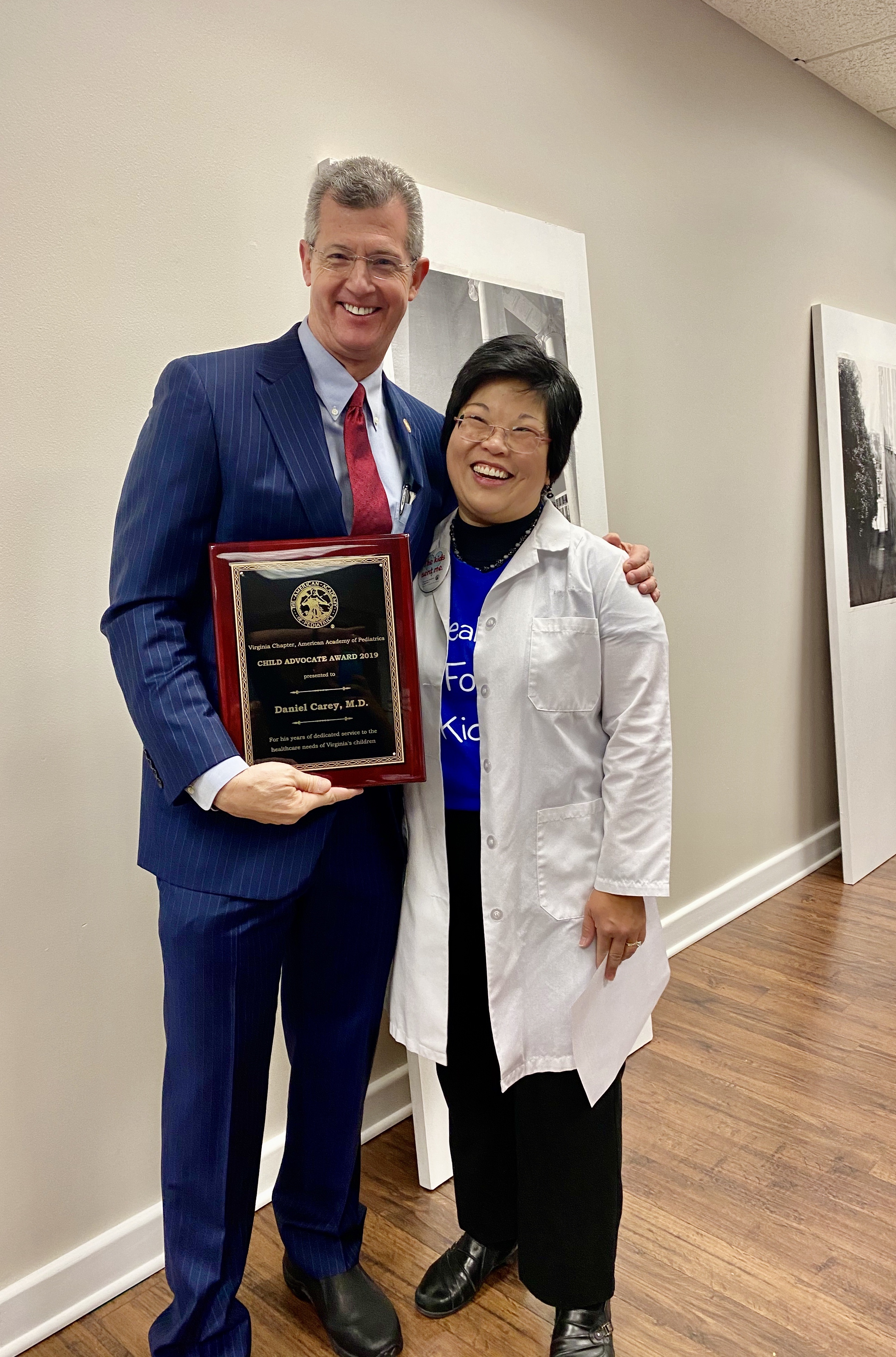 The Virginia state legislature meets in the winter every year to work on hundreds of bills proposed affecting minors & families.

The VA-AAP asks that you join us in supporting our top priorities for 2019 – improving access to mental healthcare, ensuring coverage of essential health benefits in new insurance plans, gun violence prevention and reducing food insecurity/poor nutrition in our state.

You are now officially a pediatrician advocate for child health! We wanted to let you know that the VA AAP recently purchased an online grassroots advocacy system called VoterVoice (https://info.votervoice.net). This new system will allow us to:

Many other organizations, including the Medical Society of Virginia, use this same system- so you may already be familiar with it. This will be a tremendous asset to us during the General Assembly session.

All VA AAP members are automatically signed up, so you don’t have to do anything else to receive important child advocacy information. If you do not want to know what is happening in Virginia regarding pediatricians and children’s health policy, there will always be a link at the bottom of every message that allows you to unsubscribe. If you have any questions, please contact Lauren Schmitt at Lauren@commonwealthstraegy.net We are excited to use this new tool for our advocacy efforts!

You spoke and we listened.  We asked members to rank our legislative priorities and used this information in forming out strategic plan for the next 2 years.  We hope you will help us carry out this plan by joining us in continued conversations regarding the agenda, participating in White Coat Day in Richmond, or sending by us your ideas and proposals for legislation.

The General Assembly convened for a special session on July 9th amid protests, rallies, and prayer vigils that encompassed much of Capitol Square.  Governor Northam called this special session in response to the deadly Virginia Beach mass shooting that occurred on May 31, 2019 and urged lawmakers to pass significant gun control measures.  Since the Governor’s call, both sides of the gun control debate have passionately worked to stake out their positions, previewing what many anticipated would be an ideological stalemate between Republicans and Democrats in the General Assembly.

The upcoming elections in November are critical for Virginia and could change the political landscape for years to come. The entire General Assembly- all 100 seats in the House of Delegates and all 40 seats in the Senate- are up for election on November 5. Currently, the Republicans hold the majority in both the House and Senate by only one seat. There is a strong chance that the Democrats will win the majority in either one or both chambers. This will result in a complete shift in leadership and policy direction.

We are beginning another round of PAC fundraising to help us prepare for the 2019 elections. It’s critical that we have full Board participation for when we solicit practices again. Every little bit counts, but if you can give at least $250, we can help to elect people who care about the well- being of children! Because of the importance of these upcoming elections, it is now more important than ever that we have a strong KidsMD PAC.

While it may seem early, we are already discussing what our initiatives in 2020 will be. Items brought to us to consider are:

Last year we received $1.23M to get the program started, along with a $450,000 federal grant.  We are working with the Department of Behavioral Health and the Administration to request an additional $3.77M to implement the full consultation services in each region, care navigation and telepsych services.

Below you will find our current legislative priorities which promise to affect pediatricians and children across the state.

We are working with the Medical Society of Virginia to find a legislative proposal to improve access to physicians as we begin to implement Medicaid expansion by increasing Medicaid reimbursements to physicians.

Prior authorization for drugs and procedures is an issue pediatricians face every day. Two proposals were submitted to MSV asking them to continue to work on improving the process, including the initial authorization process, the appeals process and override process.

We are working together with Children’s National and the Governor’s office to improve the education of pediatricians about mental health and increase their access to mental health providers and community resources.

We have been working with the VA Department of Health and the Northam administration to look at ways to update the vaccine schedule to ensure we are in compliance with the CDC and ACIP schedule.

We are currently actively involved with the Department of Health Professions in drafting the regulations around NP transition to practice.

Welcome to the Child Advocacy Toolkit. Here you’ll find quick references for use throughout residency training and beyond.  The toolkit is under development, so check back often! Individual patient advocacy is such an important part of clinical care that all pediatricians must be skilled and comfortable on the individual level. But beyond this, we must also develop the skills necessary to advocate for children and their families on a much broader level − within the community, state, and nation. As a pediatrician, you are an expert in child health and what is best for children. Our discipline has a long tradition of working to improve the health and well-being of all children. As Abraham Jacobi said: “The pediatrician is to sit in and control school boards, health departments, and legislatures. He is the legitimate adviser to the judge and the jury, and a seat for the physician in the councils of the republic is what the people have a right to demand.” The resources here, and the advocacy activities available to you throughout your training, offer the tools, skills and experiences necessary to establish your own individual advocacy foundation. Use these opportunities to the advantage of our children and their health! 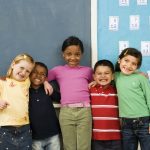 The VA AAP is offering a new Child Advocacy Certificate for residents who complete and document certain advocacy experiences, as outlined in the attached Community Health and Child Advocacy Goals, Activities, and Competencies.  Certificate Requirements:

1. “Meeting With Your Legislator” Video

2. Legislative Advocacy:  Complete ONE of the following exercises:

4. Serve ONE year on a VA Chapter committee

rtificates will be presented each fall at the business luncheon in Williamsburg.

The Origin and Significance of the Academy’s Della Robbia Insignia, Beaven PW. – Website